For some drinkers, a pounding headache and an uneasy stomach aren’t the only symptoms of a big night of drinking, with more and more hangover sufferers reporting a sense of anxiety after drinking, that accompanies their post drinking symptoms. Anxiety after drinking takes many forms, from a racing mind replaying everything you said the night before, to feeling really worried and full of dread, even if you can’t think of a specific thing to be worried about.

For some people, these doubts and worries are fleeting, but for others, the anxiety is overwhelming, and it’s not just regret from drinking too much or your mind’s effort to piece together a hazy night. In fact, it turns out that anxiety after drinking might in fact be a negative outcome of drinking that has both physiological and psychological explanations. The key to the whole experience, both physiologically and psychologically, is how alcohol affects various neurotransmitter systems in the brain.

However, the answer to what causes anxiety after drinking is difficult to pin on a single reaction as trying to nail down how alcohol affects any individual aspect fails to encompass the bigger picture of interaction that goes on in the body. So how exactly do these bodily systems interact, how does alcohol influence them, and how does alcohol cause anxiety as a whole?

Can Drinking Alcohol Cause Anxiety Disorder? 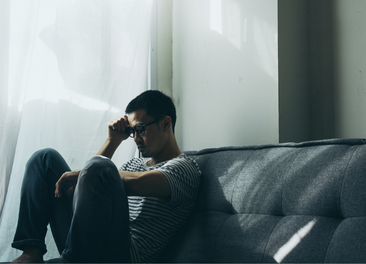 To start off with, it’s important we understand the relationship between alcohol consumption and anxiety in relation to chemicals. The way alcohol functions in the brain, is that it interferes with neurotransmitters, which triggers a release of feel-good hormones in the brain after a couple of drinks.

Once the level of alcohol in your body begins to diminish, however, these chemicals start to diminish in turn, meaning that that the levels of stress-relieving and pain-reducing hormones in your brain may be lower when you sober up than they were when you started drinking, which can happen just hours after you’ve had a few drinks.

As such, medical professionals often attribute anxiety after drinking as one of the withdrawal symptoms of alcohol.

If you experience mild anxiety after having a few too many, it could be attributable to a much milder version of severe withdrawal, seen in heavy drinkers and binge drinkers who experience physical withdrawal from alcohol.

What Could Cause Anxiety After Drinking?

While not everyone experiences hangover anxiety, it’s a relatively common symptom of a hangover. This is because, as discussed previously, a hangover is effectively a case of instant alcohol withdrawal, which is why the morning after a night of hard partying, you may feel sick to your stomach, nauseated, irritable, and anxious.

Someone who drinks heavily often, only to suddenly stop, would experience more severe versions of those symptoms – vomiting, diarrhea and possibly even prolonged anxiety or a panic attack. In other words, hangover anxiety can be one of these symptoms of withdrawal, which are not severe enough to be diagnosed.

Scientifically, this withdrawal is linked more to the functioning of the central nervous system and brain chemistry instead of pre-existing anxiety disorders. When you drink alcohol, dopamine neurons in areas of the brain associated with reward start firing more and more. The problem is that that dopamine rush is short-lived with alcohol, hence why your mood and anxiety levels might be impacted for the worse later on.

Alcohol also interrupts the activity of other neurotransmitters, including serotonin and endorphins, which can affect your mood. This means that the feelings that you have after you drink alcohol can result in a whole range of moods and anxiety symptoms ranging from panic to feeling depressed to feeling impulsive to feeling agitated and irritable. 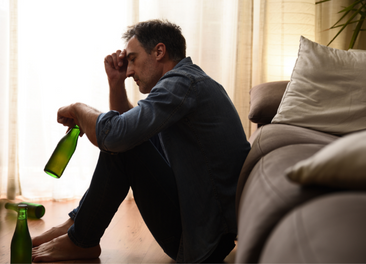 Alcohol has effects on multiple neurological pathways but the most significant one is the way in which it increases gamma aminobutyric acid, or GABA, activity in the brain. GABA is involved in several brain functions—motor control, memory, anxiety- all of which come under the inhibitory system.

What you get when the brain’s inhibitory system is working overtime and the stimulatory system is slowed down, is that delightfully relaxed feeling that sets in after a couple of drinks.

The thing is that if you’re drinking heavily for a long period of time the brain tries to adapt to these changes by downregulating the inhibitory system to maintain a balance. This is problematic however as when you stop drinking, you’re left with a brain that’s been adapting to alcohol’s sedative effects by dialing down the inhibitory system and dialing up the excitability system.

When this happens, you may feel jittery, irritable, and, you guess it, anxious.

How To Treat Anxiety After Drinking

Now that you understand why you feel anxious after drinking, you can start preventing a mental health slump by avoiding an alcohol use disorder, with these simple steps:

Exercise can have an immediate beneficial impact on your mind and body, with physical exertion in the form of moderate or vigorous exercise leading to lower levels of anxiety and depression. This is because exercise reduces stress hormones such as cortisol and adrenaline and triggers the release of endorphins, the body’s natural stress relievers and pain reducers. In the case of a brain dealing with an alcohol-based imbalance, this can be very beneficial in speeding up recovery.

“If you experience mild anxiety after having a few too many, it could be attributable to a milder version of severe withdrawal.” 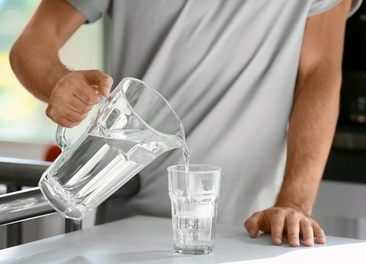 When your brain doesn’t have enough water, both cognition and mood can decline, which is a shame since alcohol is well known to dehydrate those who drink it.

As such, make sure you stay hydrated by drinking water and other clear liquids when recovering.

You can also try sports drinks with electrolytes and other nutrients to help you replenish your body’s stores. In fact, research suggests that decreased water consumption when drinking can lead to a decline in feelings of calmness, satisfaction, and positive emotions, as well as an increase in sleep disruptions, like insomnia.

“Exercise reduces stress hormones such as cortisol and adrenaline.”

Fuel Your Body With Food

After a big night of drinking alcohol, eating might be the farthest thing from what you feel like doing, but it is often a very good plan if you can stomach it. Low blood sugar, an empty stomach and general lack of nutrition can seriously enhance anxiety symptoms, and can prolong the duration of a hangover. While you might want to nurse a hangover with greasy or fried food, having something healthy and nourishing can help you recover faster. Eggs are a good choice, and so are nuts, spinach, avocado, oatmeal and most whole, healthy foods.

“If you find your anxiety after drinking lasts more than a couple of days it’s a good idea to talk to a medical professional about anxiety and mental health.” 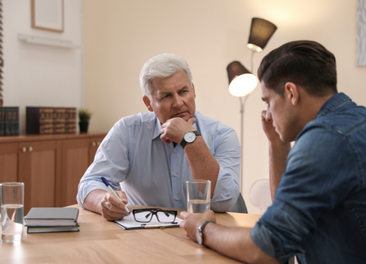 If you’re feeling panicky after drinking, you might be overwhelmed by all the things that need to get done. Instead of focusing on everything you can’t do while you’re taking care of yourself, just focus on the present moment and what needs to happen next.

If you find yourself getting overwhelmed, take a deep breath and put your energy toward focusing on the next step you can implement to get your day under control. Try zooming out and widening the lens of your awareness to put anxious feelings in perspective.

It is also very important to be aware that if you find your anxiety after drinking lasts more than a couple of days or persists despite your drinking less, it’s a good idea to talk to a medical professional about anxiety and mental health.

Intense anxiety can be a very difficult mental health issue to deal with, so the sooner you manage to get help, the better. Call our treatment specialists today, its a 24/7 free call 877-322-2694.