Whether you’re planning on starting the party early, or if you’re trying to keep the party going from the night before, morning alcoholic drinks is always a great choice as long as you’re drinking responsibly. With such a broad range of fruity, salty, and even spicy cocktails that are great with breakfast or as breakfast themselves, there’s bound to be some drinks that appeal to your early morning cravings. So, without further ado, let’s shine some morning light on to the wide range of morning alcoholic drinks!

If you’re the sort of person who needs their coffee to function in the morning, then this is the drink for you. A direct double hit of caffeine and booze straight to the system that is perfect for the start or end of the night, Irish coffee is one the most classic coffee mixed drinks. 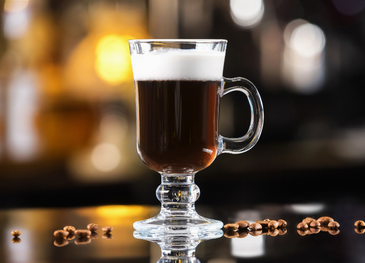 A perfect combination of sweetened coffee, Irish whiskey, and of course whipped cream, this is a cozy, delicious, and incredibly easy to make morning drinks.

Irish coffee was first created in 1943 by an airport chef named Joe Sheridan, who whipped it up for passengers whose flight had been rerouted back to his small airport near Limerick in Ireland.

With multiple different recipes developing since then, this cocktail can be made with just about anything you could think of, from brown sugar to vanilla ice cream on top.

If you’re vegan or avoiding dairy, there are tons of options for vegan whipped cream as well! If you don’t mind a little coconut flavor whipping coconut cream is always a great option.

If coconut isn’t your thing, you could try whipping aquafaba instead, or even check out some of the rice and soy products that can be whipped up into this delicious drink.

As you might guess from the name, the Bellini is an Italian classic, with the original recipe coming from Venice. Originally the recipe consisted of two parts Prosecco to one-part white peach puree with a touch of raspberry or cherry juice, which gave the drink a unique translucent pink hue. Since then, the recipe has developed a number of variations, featuring cranberry juice, lime juice and even fresh strawberries!

“Ideal morning alcoholic drinks are as just as delicious served at a dinner party.”

The Bellini is a delicious alternative to the ever-popular Mimosa, especially if you’re wanting something other than orange juice. The peach puree is relatively unique, with a less tangy flavor than orange juice, making it light and delicate, perfect with almost anything. It’s an ideal morning alcoholic drink, but it’s just as delicious served at a dinner party. 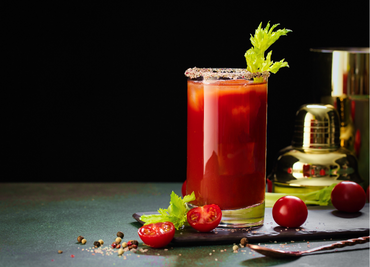 One of, if not the, most popular morning alcoholic drinks, this is what comes to mind when most people think of drinking before midday, thanks to the drinks prized ability to jumpstart even the groggiest of mornings.

Its origins aren’t exactly clear, but the original Bloody Mary is believed to have contained seven ingredients: vodka, tomato juice, Worcestershire sauce, black pepper, celery salt, Tabasco and lemon juice. But like many classic drinks, it has inspired several variations.

More recently, the Bloody Mary has inspired a garnish-based arms race, as restaurants and bars top their drinks with more insane garnishes, including bacon, cans of ginger beer, shrimp skewers, lobster tails and mini cheeseburgers, turning the Bloody Mary into its own brunch.

When in doubt, it’s best to start with the classic recipe and work toward the way you like it, whether that is pared down, topped with a pepperoni pizza or featuring your favorite hot sauce mix.

Despite the endless variations and regardless of how you choose to make it, the Bloody Mary’s staying power is not debatable. It’s a liquor-soaked breakfast and debatable hangover cure all in one package and is one of the few cocktails that it is socially acceptable to drink first thing in the morning. What else could you ask for? 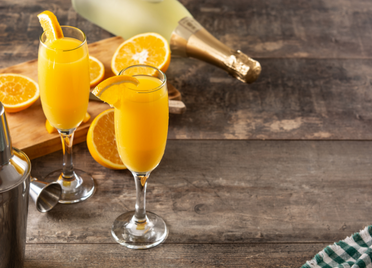 Made up of just two ingredients, the Mimosa is a refreshing combination enjoyed by many on a Sunday morning, so much so that can’t go out to brunch without seeing or ordering a Mimosa. In fact, there are even brunch spots that serve one complimentary or offer bottomless mimosas!

The sparkling wine and orange juice mixture has been known to have different origins; however, it has stayed true at heart over the years.

A Mimosa is intended to contain equal parts of orange juice and champagne, and equal parts conflict over its origin, as it is believed that a bartender in 1925 at the Ritz Hotel in Paris, created the mimosa.  However, another account says director Alfred Hitchcock invented the beloved drink in San Francisco in the 1940s.

Regardless of what version is true, a Mimosa will always be the go-to brunch drink for millions of people, and it’s not hard to see why.

The Greyhound benefits from one of the best strategies used to enhance a cocktail – add grapefruit juice. Grapefruit is a highly acidic fruit, yet its flavors are very subtle making it a great ingredient for mixed drinks and making the Greyhound one of the most popular cocktails for the morning. Inspired by the Screwdriver, this morning alcoholic drink differs by calling for grapefruit juice in place of the Screwdriver’s orange juice of orange juice.

“This hard juice mixture is sure to have you feeling good before noon.”

For your liquor, you can use either gin, vodka or any relatively light, clear alcohol. A classic greyhound is made with a 4:1 ratio of grapefruit juice to liquor, however, if needed, you can always make it a bit stronger. While this drink might look just like a regular glass of grapefruit juice, don’t be fooled. This hard juice mixture is sure to make you feel good before noon, making it one of the best brunch drinks around. 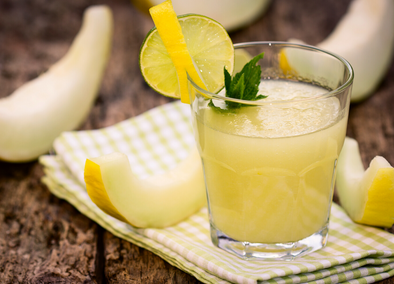 The melon patch is a fabulous option for a springtime brunch cocktail that could make an excellent accompaniment to a fresh fruit salad.

A light and refreshing melon and vodka drink that’s very easy to mix up, this recipe only uses four ingredients that are common in most bars, so there’s no need to hunt down anything special.

Starting off with the melon liqueur, Midori is one of your best bets, and it pairs perfectly with vodka and isn’t too strong for morning alcoholic drinks.

Next up, the triple sec, an orange liqueur, brings in a hint of citrus, while the club soda follows with a fresh sparkle. Once these are all mixed, the result is a fruity green highball that everyone’s sure to love as the perfect brunch drink!

Gunfire is an English cocktail made with a combination of black tea and rum, a thoroughly no-nonsense drink that feels very British from the get-go. To prepare Gunfire, black tea is first poured into a cup, followed by a shot of rum, and the whole combination is then stirred. 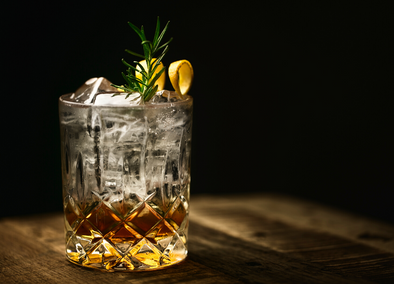 It is believed that the drink has origins in the 19th century, when it was served to lower-ranking members of the British Army by their Officers.

It is rumored that officers served a glass of gunfire to lower ranks before a morning attack as a form of Dutch courage and before a passing out parade.

During even tougher times, soldiers were traditionally served while they were resting in their beds on special occasions like Christmas. This was done to bring out the festivities and provide a sense of holiday spirit for those in need.

In New Zealand and Australia, a version of gunfire with black coffee instead of tea is served to soldiers before dawn services as part of a ‘gunfire breakfast’.

“It is rumored that officers served a glass of gunfire to lower ranks before a morning attack.”

A potent blend of Scotch and absinthe, the Morning Glory Fizz’s rough edges are smoothed over with silky egg white and a splash of soda to quell the pangs of a hangover headache. 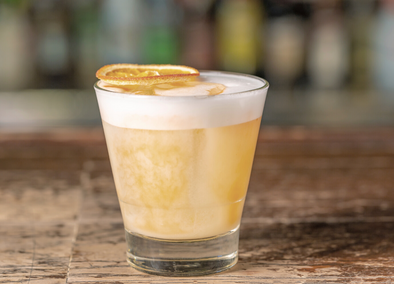 An orange garnish brightens the boozy aroma and calls one to face the day with renewed vigor.

Originally designed to ‘de-glaze the brain’ after a long night of revelry, this classic cocktail has since become a Scotch staple.

The drink relies heavily on whisky, along with citrus, egg white, sugar, some soda and absinthe.

Typically, absinthe is used as a spray over the completed cocktail, although in other versions of the drink absinthe is added in as an ingredient.

Either approach leads to a largely white drink that certainly deserves the name fizz, a name and nature that definitely makes it very suitable for before noon.

Many cocktail origin stories are shrouded in murky lore, but the Ramos Gin Fizz is an exception, with the story of its creation well known and loved. This drink was first mixed in 1888 by Henry Charles “Carl” Ramos in New Orleans. Along with drinks like the Sazerac, the Ramos Gin Fizz is one of the city’s most identifiable cocktails, and one that has stood the test of time, as it’s still in circulation today.

“Foamy, fresh, floral and delicious, the Ramos Gin Fizz is worth rolling up your sleeves for.” 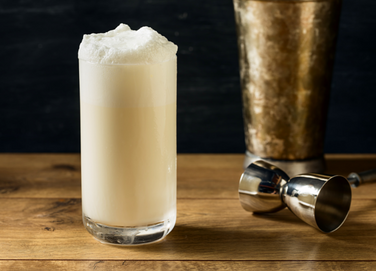 Heavy cream lends richness, the egg white bulks up the mouthfeel, and the orange flower water provides a floral note.

Finally, sparkling water lightens the drink, adding a touch of effervescence, and making it perfect for a morning cocktail.

But that’s not all that makes this cocktail special. The story goes, that Ramos employed a chain of ‘shaker men’ in his bar to meet the constant demand from locals and tourists, who had become enamored with the cocktail.

Supposedly, each drink was shaken for between 12 and 15 minutes, but don’t let that fun fact discourage you. Foamy, fresh, floral and delicious, the Ramos Gin Fizz is worth rolling up your sleeves for.

If you feel the need for a morning alcoholic drink, or know anyone who is struggling with alcoholism, please call one of our treatment specialists on 8773222694.